A company with the name ARTYPA was founded in 1946

by Frantisek Sklar and the name of the company is derived from the three Latin words – ARS, TYPUS, PAPYRUS – art, print and paper. Production programme at that time consisted of producing small volume of folding cardboard boxes, labels for laminated board, children pop-up books, fairy-tale books and also reproductions of Walt Disney cartoon characters. All the packaging products achieved high graphical standard, smart colour scheme and overall quality since the very beginning.

Artypa had undergone some organizational and production changes throughout the years of its existence.

Due to changes in ownership in the turbulent and significant year of 1989 two companies with headquarters in Holubov emerged. Artypa Holubov Ltd. and Artypa Sykra Ltd., that played a vital role during the privatization process.

All production and marketing activities were taken over by a company now named Artypa Holubov on January 1st 2004.

It concentrates mainly on printing and processing packaging and folding boxes from carton board, cardboard, corrugated board, including polygraphic production, production of thermoformed cardboard cheese boxes, posters and catalogues.

The last significant change concerns a new name of the subsidiary, which is now GRAFOBAL BOHEMIA Ltd. 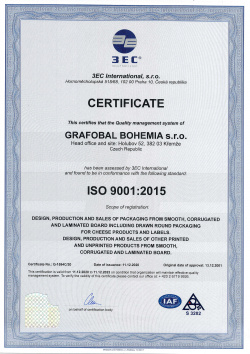